Today in our boat building group, we continued to 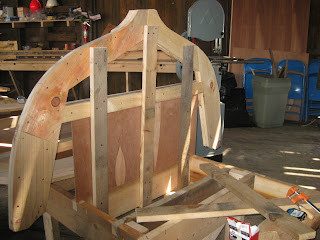 work on our molds, the skeleton of the ship. The molds are almost completely set up, at this point. We attached these molds on to three planks of vertical wood. It could get cramped for the people that were in between two close molds, because they had to move their hands backwards to screw in the screws. It turned out that a couple of these molds had been facing the opposite direction as they were supposed to, and we had to turn them around. Hopefully, these will be done by the end of tomorrow.
Shallop ship building student,
Wesley Blum

Posted by Maine's First Ship VIRGINIA at 4:16 AM